Two years after joining the Chicago Police Department in 1976, Pat McCarthy transferred into a Special Opps unit that included the CPD SWAT team. Special Opps combined with Gang Intelligence to form the Gang Crimes Unit in the early 80s, and McCarthy went undercover to infiltrate the gangs that controlled Cabrini Green, Humboldt Park and other areas on the north and west sides of the city.

Some of those days led McCarthy to ride his department-issued motorcycle wearing only faded, torn jeans, boots and his firearm strapped to an ankle holster, making drug buys from Chicago’s most notorious gangs. As he moved into other undercover details during his 26-year career, McCarthy dressed up as a female prostitute, infiltrated a Chinese Organized Crime family as a corrupt cop , worked with an FBI task force on International Criminal Enterprise and rode the with the Royal Canadian Mounted Police in Canada.

“When I was working undercover, everybody told me I should write a book,” reveals McCarthy, who retired from the Department in 2000.

Chicago Street Cop, Amazing True Stories from the Mean Streets of Chicago and Beyond premiered in March and is making quite the presence on Amazon.com, BarnesandNoble.com and other venues where the most compelling books are sold. Described as a book that will forever change the way you think about police officers and the dangerous work they perform, Chicago Street Cop combines touches of Serpico, Donnie Brasco, American Gangster, The Untouchables and the classic law-and-order stories written by the great Joseph Wambaugh.

“I had written a lot of notes throughout my career on cases and stuff, almost like a journal,” McCarthy explains. “I was so lucky to have such a wide variety of experiences, and I wanted to tell my story to encourage other coppers to live their dreams because I got to live my dream.” 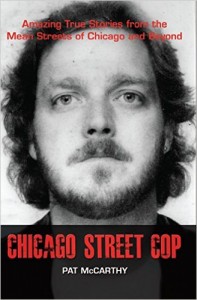 McCarthy’s dream began watching his dad, Harry, put on his uniform every day and go to work for the department, and actually his family has given four generations to the CPD. (His great grandfather emigrated from Ireland to join the force, and Pat’s son, Ryan, works on a tactical team out of the 11th District.)

Chicago Street Cop begins with the moment McCarthy realized he was meant to be a cop. As a kid in the 1950s, he writes about hearing a domestic incident across the street from his north side home and running out in his underwear to try to help.

“Being a cop, you don’t get a rush from anything else like that,” he confides. “It’s a pretty intense feeling.”

Harry passed away in Pat’s first year on the job, but one of Harry’s friends, Commander Michael O’Donnell, helped Pat get into working undercover, something he had a passion for since seeing an undercover copper speak when he as at the academy. Following five years working undercover in Special Opps, which included “Operation Angel” that led McCarthy to borrowing a wig from his sister, a fur coat from his mother and dressing up as prostitute alongside a female partner to address the growing sex-for-sale problem in the city in the 80s, he spent 11 years assigned to three different FBI task forces.

“It’s about as crazy as you can get, so I just tried to tell the stories like they happened,” McCarthy reasons about turning his work into prose. “I didn’t add stuff or fake stuff. There are true stories that I tried to make as gritty and real as possible.” 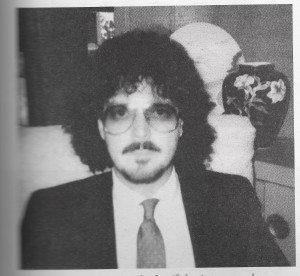 A disguise Pat wore to court when testifying against gang members.

Following retiring from the CPD, McCarthy decided to get serious about writing a book. And here’s how serious: Despite traveling more than 30 weeks a year for his “Street Crimes” business he had started to train officers across the country on surveillance, gang and drug investigations and other areas of his expertise, he would spend additional weeks going to Australia, Paris, China, Thailand and other faraway places just to write.

“Every year at the end of the year, I would take a trip,” he explained. “I would lock myself in a room for five days and all I would do was eat and write.”

His goal was to create a ride-along for readers and present his wide range of experiences. He notes that the only facts he changed were the name of three informants, and the book really comes to life with that intimate story-telling ability that some cops just seem to have a knack for.

When he writes about mixing it up with the gangs and knowing everybody in the gang by name, their girlfriends, the cars they drove, where they laid their heads down at night and where they ate and drank, you can picture McCarthy making the rounds at Cabrini Green. The authenticity apparently makes an impact as some readers have noted in the first round of reviews showing up online, including:
Rte66guy: “A true and realistic account of what goes on in the life of an undercover cop. Gritty with no filter added, a must read for anyone interested in true stories from the mean streets of Chicago.”

Clayton E. Searle: “McCarthy makes you feel like you are there as he buys drugs from a homicidal maniac and searches for a robbery suspect in a dark alley.”

Amazon Customer: “As a former cop, I feel Pat has certainly captured the excitement, thrill and emotion of what the job is truly all about.”

Read all about it 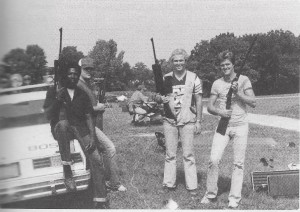 Pat on the far right with members of his FBI task force team.

What McCarthy’s job was all about comes through loud and clear in the 27 chapter titles that make up Chicago Street Cop.

Some that stand out include Chapter 10: “The Airport,” which recounts his work sifting through the carnage of American Airlines Flight 191 that crashed shortly after taking from O’Hare in May 1979; Chapter 17: “Sticks and the Insane Deuces,” an inside story about one of Chicago’s most violent gangs; and Chapter 24: “Let Them Eat Pigeon,” which you will have to read for yourself.

The one that might stand out at first glance is Chapter 22: “Thai Hookers.” When McCarthy was assigned to the FBI’s Asian Crimes Task Force, he tracked a case to a murder at an Asian massage parlor in Philadelphia. By getting five of the “employees” at the massage parlor to turn informants, he was able to solve the case.

And the hits just keep on coming. McCarthy tells about an encounter with “Lady D,” while making a drug buy with the Insane Deuces and how he fought off the attack of…again, read that for yourself. One of his favorites titled “What It’s Really Like,” begins with a tale of a screaming woman running out of a house after seeing two dead bodies in the basement and goes on to describe some of the ugly details cops must deal with.

Another chapter he calls one of the most intriguing is titled “A Night with Professor Daye,” which recounts a professor from Bowling Green, Kentucky who had been wanting to ride-along with McCarthy coming to town and getting to see up-close the aftermath of a gang member shot in the head at a pool hall.

And the response to Chicago Street Cop has been so overwhelming already that nobody should wait for the movie, which certainly could be coming.

“I wanted to make my book very pro-police, which I did,” McCarthy emphasizes. “All I ever wanted to do was be a police officer. I would have done it for free. I never had a bad day on the job even when I had a bad day. I loved every second of it.”